This was a rather long-delayed update, but at least I get to reflect on the lab sessions and readings I’ve participated in during the summer of 2015. Add to it the premiere of my new large chamber piece Wilujeng by the McGill Contemporary Music Ensemble just a few hours ago at Pollack Hall. Since these projects happen to coincide along with my thesis writing in the form of Wilujeng that’s supposed to be finished in time for the August deadline, I end up getting caught up in a whirling state of mind as I try writing and struggling, project after project. I’ve decided early on to write miniature sketches for these reading sessions as it would be easier for me to accomplish them.

Three words: It was crazy. 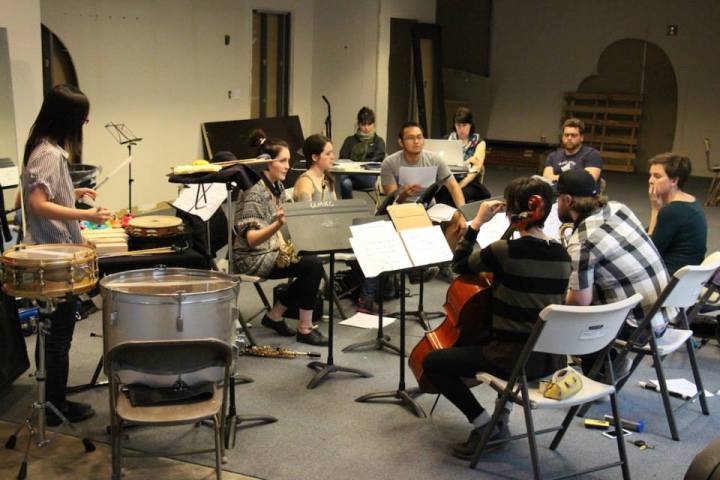 Photo: Rehearsal during the Kansas City-Montréal Exchange, a project initiated by the Montreal Contemporary Music Lab and the Black House Collective.

Of course, with the given time constraints for the spring-summer projects, writing miniatures would be the most practical thing to do. And yet, doing them is a fascinating thing for me. Funny that it’s completely the opposite of my way of writing (articulating ideas in words), because I always tend to want to go on and on when I write using words. But when I don’t feel a need to compose a 10-minute work, I usually just resort to creating short moments of aural snapshots. Yes, I like comparing miniatures to snapshots, to frozen images of sound. If music is but a fleeting moment, miniatures are the best models of such manifestations of temporal conditions. With this in mind, I composed two miniatures for different sextet groups (one for the Kansas-Montréal project in April and June, and one for a reading with Ensemble Transmission) and based them on my attempts to understand Indonesian gamelan music more.

I always have to remind myself why, of all the things that I can explore, it should be gamelan music. My fascination with the musical landscape and culture along with it may seem comparable to an outsider’s fascination with something he/she exoticizes. After all, German composer Dieter Mack used to tell me that if I want to study gamelan, I should learn the language of its people first (and since then, I have known bits and pieces of Bahasa Indonesia already). But coming from the Philippines which, I believe, shares relations with the culture where the gamelan is situated on, I want to explore how Benedict Anderson’s idea of imagined community applies even in transnational and regional contexts. And I think Filipino composer Jose Maceda was also on the same exploration as well during the 1950s onwards (even before Anderson came up with such a succinct definition of nationalism in the 80s), imagining a pan-“Asian” aesthetic (with quotes, for given my understanding, it is hard and sometimes problematic to define what Maceda’s “Asia” comprise of) that can be the basis for a new modernist take on contemporary music in (Southeast?) Asia. With the rekindling of a larger new music community in Southeast Asia since the past decade, it seemed appropriate as well to imagine oneself in this strong emerging force even within a different sense of place (as where I am at this point). I am Southeast Asian, just like all Filipinos and Indonesians are. If shared ways of living or sensibilities are considered as incentives for intercultural explorations, then why can’t I look at gamelan within the eyes of Indonesians without losing my sense of Filipino-ness?

And so, my desire to explore translations of musical languages comes in. Given that the gamelan served as a springboard for enabling me to create more meanings, I don’t merely want to “sound gamelan-like” and therefore be accused of mindless cultural appropriation. Even Steve Reich, who sees the world with Western eyes, said that he considered copying non-Western melodies into one’s work very superficial. He insisted on looking at the musical structures for the education of the Western composer, that he/she would see that the Western way of music making is only one of many others throughout the world. So in the case of the gamelan, it takes more than just knowing how the slendro or pelog tuning sounds like. One has to know how and on what systematic principles do the musical elements in the tradition operate on. And so with the two sketches I wrote, I wanted to explore how passages of time are created using different musical sensibilities that are necessarily found in gamelan performance. For the Kansas-Montréal exchange, the linearity of the balungan of Ladrang Wilujeng became the backbone of the sketch while holding individual time-space trajectories together. For the Ensemble Transmission reading, the linear deceleration found in irama transitions is the basis of making a formal structure work into moments of musical textures. These coalesced into a large ensemble work which just got premiered hours ago, with the inclusion of the colotomic structure, the vocal element, the use of different spoken languages, and the gamelan gending tradition as significant factors in creating a hyper-realistic model, a way of “looking back” (to somewhere I once belonged to), a way of looking forward (towards the future of music-making in Southeast Asia and beyond).

This is so far an unfinished endeavour, a snapshot of something that is still moving.

Update: The recordings of the Kansas performance and the Ensemble Transmission reading are already up! Check them out in my Soundcloud page here and here.