Four weeks passed by in a blur of sweeping events and idyllic moments. Even upon waking up today, my senses are still jeopardized with how disorienting home is just as quick as how bodies and mindsets acclimate to new, temporary environments.

Starting an artist residency at the Kimmel Harding Nelson Center for the Arts at the end of July was a timely one. The school year has just ended, and I was exhausted with teaching and training from having no summer break at all last year (save for an October two-week residency at the Brush Creek Foundation for the Arts). Besides dealing with two student concerts/recitals, I completed two commissioned premieres—the dance project with Sarah Samaniego and the art song project with the Art Song Collaborative Project (watch out for the videos soon!)—along with another performance with the Thin Edge New Music Collective and a public talk/performance with Soundstreams. (I already mentioned these in a previous blog post). Pressure was building up and I had to sneak in time to pack up for a month in Nebraska during the art song premieres, in which the last show was scheduled literally a day before the flight. The elusive package delivery containing my newly-purchased AKG C214 condenser microphone has to arrive before my departure as well.

The usual “Nebraska Nice” slogan took over when Ron picked me and a fellow resident artist up at the Omaha airport. The whole 45-mile van ride unfolded over endless swathes of corn fields and presence of rural country life. Arriving at Nebraska City (population: 7,500), we were dropped off at the arts centre where resident artists live in cozy apartments and do creative work in studios. Everyone went out to a local restaurant the next day for a meet-and-greet lunch, and those who just arrived got a well-informed tour of Nebraska City. I was able to set up the composer studio with my electronic gear since my arrival, and this room became the birthplace of creative endeavours I wanted to achieve throughout my time.

My initial agenda for the residency is to devote computer coding time for further developing the one-hour radio theatre project I planned two years ago. That agenda expanded beyond the confines of contemporary music since then, dragged along with musings about the problematic past, the problematic present, and the problematic future. Majority of these revolve around forming the cynical but “squishy-cute” alter-ego Grumpy Kitty and his toys: “synth pop songs!” (These reflections on being a “grumpy kitty” are meant for another future blog post). With this little baby in mind, I even started writing the lyrics of a new pop song for him on the plane ride to Omaha. I planned to write one song per week (totalling to four), but mood swings got the better of me and only did two. Recording all lead vocal tracks for an upcoming EP release (containing 6 original songs I wrote) also seemed like the right thing as an artistic goal, although the surprisingly noisy cargo trains and lawnmowers around the vicinity proved to be an initial challenge. (I accomplished that within seven days). 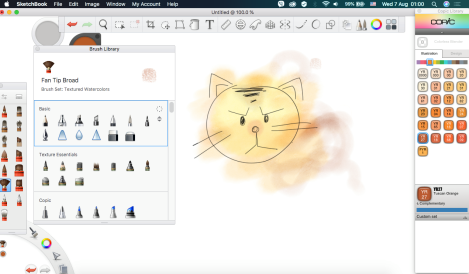 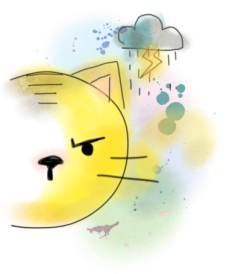 Contemporary music isn’t off the hook, at any rate. I learned more ideas about coding and managing control structures that gave specific insights on how to build some architectural framework, influencing the way I imagine and eventually compose the whole work. Integrating spoken word poetry with live music and audio processing stands as is, and I still retain the textual component as significantly important where words, narratives and imagery serve as anchors and markers in formal structures. (That’s like how the gongs of the Javanese gamelan or the Maguindanaon kulintangan shape the passage of time in terms of colotomy, circularity, trajectory, contemporaneity against history, etc). The diaspora, the notion of multiplicities, and the tension within positioning selves among a vast nodal network of meanings remain fascinations and a (somewhat intentional?) points of struggle for this work.

Alongside these developments, I started writing the first few pages of a bass clarinet-accordion work as commissioned by Martin Carpentier and Joseph Petric for next year’s premiere. I gave it a name early on: “Kinamulátan” [kee-nah-moo-LAH-tahn]. (The premature naming was originally for an unsuccessful commissioning award application). I find this Tagalog word intriguing—”mulat” [MOO-laht] is the infinitive form of the verb meaning “to open one’s eyes,” but it can also mean “to educate” in an idiomatic context. On another note, “mulát” [moo-LAHT] is an adjective describing either a person’s opened eyes (from a previous sleeping or unconscious state), or in specific contexts, someone possessing full awareness of what’s going on. Adding up the necessary conjugations, “kinamulátan” becomes the site of a person’s awakening, the place where one wakes up from deep sleep, the scene that strips one of innocence and naivety. Drawing trajectories of affinity with Asian mouth organs and the concept of drone in Southeast Asian musics, I intended this piece to be an anchor of where I come from and how I get here (or anywhere). As the cyclical nature of time prevails, it doesn’t usher in a pessimistic form of resignation or fatalistic inevitability—instead, it becomes a source of strength to the point of exertion and meaningful exhaustion.

Of all the numerous things I did in Nebraska City (including biking around, flying a kite for the first time, following a forest trail, relaxing in three bonfire nights with everyone, engaging with local history, visiting museums in nearby Omaha, buying vinyl records at an antique store, hearing a tornado siren for the first time, exploring a closed bike trail and finding live crayfish in the most unexpected places, seeing Gallivant and Freakabout perform in a historic barn full of locals young and old), witnessing the sunset on my last night in Nebraska City is a favourite.

It’s Le Petit Prince all over again—I wish I could see this particular sunset forty-four times (quarante-trois en version originale). Someone will ask: was I so sad on the day of the forty-four sunsets?

A rare bamboo tray carrying the map of the Philippines. Bought it in an antique store.

The Steamboat Trace Trail, which was unfortunately closed due to the flooding.